2 BALI DANCERS - I Made Suta 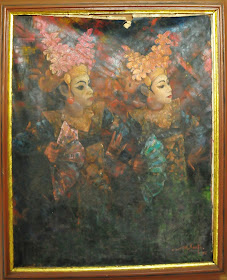 I Made Suta – the Black and White Maestro 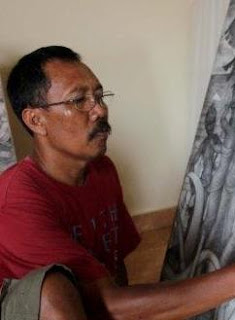 Suta, the eldest brother who was born at Taman Kaja – Ubud on August 6, 1960, is the first who paint among them three. Never had a formal teacher, he got his influence from the painters he adored: Ida Bagus Made Poleng, I Gusti Made Deblog, and Rudolf Bonnet. After finishing his study at SMSR (Sekolah Menengah Seni Rupa)/ High School of Fine Arts, he inevitably had to face the bitterness of economic difficulty. Sacrificing his dreams to support his parents and other siblings, he had to first work in the hotel industry for four years. However, his love for the arts made him make a comeback. In 1986, he decided to go on with his fine arts study at IKIP (Institut Keguruan dan Ilmu Pendidikan) PGRI/ Institute of Teaching and Education. This makes him the only one of the three brothers who has a proper art education. After years of work as a lecturer, Suta finally decides to be a full-time painter. He is a perfectionist, the most serious character among the three.

Balinese dances are a very ancient dance tradition that is a part of the religious and artistic expression among the Balinese people, native to Bali island, Indonesia. Balinese dance is dynamic, angular and intensely expressive. The Balinese dancers express the story of dance-drama through the whole bodily gestures; fingers, hands and body gestures to head and eyes movements.

There is a great richness of dance forms and styles in Bali; and particularly notable are those ritualistic dance dramas which involve Rangda, the witch and the great beast Barong. Most of dances in Bali are connected to Hindu rituals, such as the Sanghyang Dedari sacred dance than invoked hyang spirits that believed to possess the dancers in trance state during the performance. Other Balinese dances are not linked to religious rituals and created for certain purposes, such as Pendet welcoming dance and Joged dance that is social dance for entertainment purpose.

The lifestyles of Balinese people is expressed in their dance. Not only do we learn about the Balinese religion from their dance creations but also we can come to understand the flow of cultural events and activities that belong to everyday life. We can discover Balinese attitudes, how they look at nature, and how they regard their fauna and flora.

The very essence of the Balinese culture is dance and drama, which is performed during temple festivals and in ceremonies. The dances performed in hotels is a small fraction of what Balinese dance has to offer.

Balinese dance goes as far back as Balinese written history with much of the heritage originating from Java. Ironically, as a result of the Islamisation of Java, the Javanese culture has disappeared but has still survived in Bali and has become part of classical Balinese culture.

Balinese dance cannot be separated from religion. Even the dances for the tourists are preceded by many dancers praying at their family shrine for taksu (inspiration) from the gods.

The typical posture of Balinese dance has the legs half-bent, the torso shifted to one side with the elbow raised and lowered in a gesture that displays suppleness of the hands and fingers. The torso is shifted in symmetry with the arms. If the arms are to the right, the shifting is to the left and vice-versa.